Question: What does the fixed income market have in common with the Sistine Chapel? Answer: The main action is on the ceiling. The Federal Reserve recently strengthened the scaffold holding us up by suggesting rate increases won’t come before 2023. And as shown in the accompanying illustration, alternative scenarios, movement away from the ceiling, are most likely to be downward. Stay-in-place-or-fall is not an ideal set of scenarios for less-risk-tolerant fixed-income investors. We offer four ETF ideas for this highly-challenging asset class. 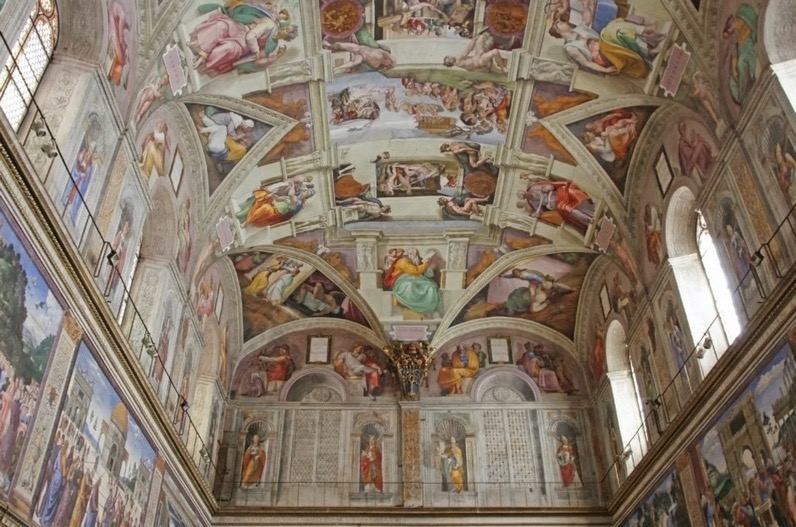 The End Of An Era

For the better part of 40 years, quants, asset managers and advisers thrived on being able to present performance records that trended nicely upward, sometimes with some interruptions, but on the whole, distinctly upward. That’s gone the way of airports without security, where anyone can walk up to any gate any time.

Let’s take a quick detour to the negative-interest-rate topic: Interest rates don’t REALLY go and stay below zero other than narrow technicalities of the sort through which some overnight-type inter-institution rates transition to fees. Don’t expect Visa or MasterCard to pay you 5% or more to keep your balances high and don’t expect banks to try to get you to refinance your mortgage by offering to give you money to hold for 30 years and pay you interest at an annual rate of 8% to motivate you to keep holding the money.

When interest rates are at zero or as close to zero as is feasible given the spreads that necessarily arise between a benchmark rate and other securities priced with reference to it, prices must, since they move inversely with interest rates, stay the same or fall. That’s where we are. At some point, fixed- income prices will have come sufficiently off the ceiling to allow again for gains. But we’re now thinking 2023 and beyond and even then, rate declines are not likely to be anything that could remotely support the sort of performance graphs we knew and loved since 1982. 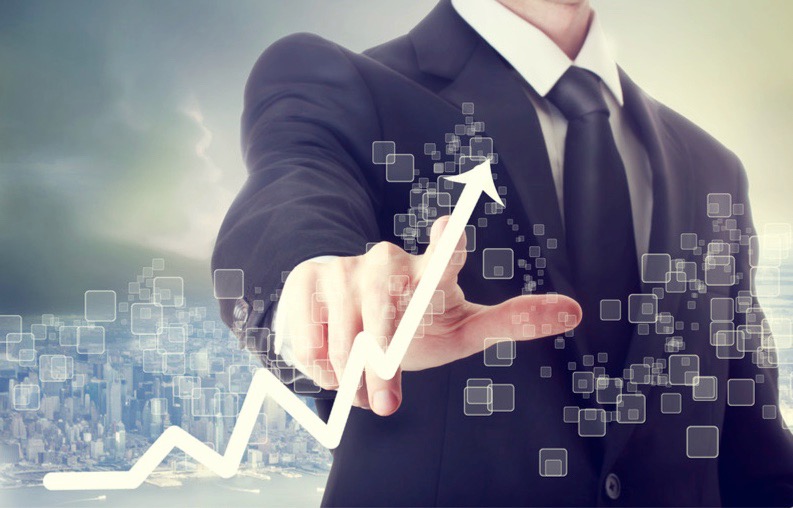 A Relic Of The Past: © Can Stock Photo / Melpomene

For starters, it’s important to understand that thinking about fixed-income ETFs involves a process that differs greatly from picking equity or other kinds of ETFs.

Click here to review an 8-step process to evaluating Fixed Income ETFs, including a discussion of why yields can’t be taken at face value (this will be important to understanding why, when I discuss individual ETFs, I’ll be relegating published yields to the back burner).

Part of the selection-evaluation process involves the Chaikin ETF Power Ranks, which, for fixed-income ETFs, are based entirely on technical analysis, as explained via the above link and our “White Paper.” Table 1 shows the performance of US Fixed Income ETFs ranked favorably (Bullish or Very Bullish) compared to those ranked unfavorably (Bearish or Very Bearish).

Normally, with rates near zero, we’d expect the market to favor shorter maturities that are less subject to the risk of rising rates. But now, the market is taking at face value the Fed’s suggestions that rates won’t go up in the near term, and is becoming less fearful about reaching for extra yield by favoring ETFs that emphasize longer-term securities.

Interestingly, though, TIPS (Treasury Inflation-Protected Securities) ETFs are coming up with favorable ranks. With inflation still so low, one would think these securities, which trade at lower yields today but can have their yields adjusted upward in the future if inflation rises, would not seem appealing. But what’s happening, I think, is that the Fixed-Income markets are taking very seriously the possibility that the Democrats will gain ground in the upcoming election and pursue heavy fiscal stimulus, or that the Republicans will remain prominent wind up pursuing heavy fiscal stimulus anyway, maybe not as much as Democrats might but enough to make future inflation a concern. So TIPS are, indeed, worth some consideration.

TIPS aside, I’m not inclined to get aggressive stretching maturities. This isn’t just about return; it’s also about risk (ditto for equities, but fixed-income investors are less likely to just pay lip service to the risk consideration than are many on the equity side). I really don’t think the extra reward is enough to justify going all the way out in terms of maturity. An expression of intent by the Fed is one thing. Following through is another, especially when, as now, the economic outlook remains uncomfortable and monetary policy is no longer capable of stimulating anything). And shortly after I typed the first draft of the last sentence, Fed Chairman Powell essentially told Congress the same thing!

When I recommended three ETFs back on June 10, I conspicuously omitted the iShares Iboxx $ Investment Grade Corporate Bond ETF (LQD) (ETF Home), the huge (assets under management: $56 billion) bellwether in this area which was ranked Very Bullish then and is ranked Bullish now. Its current published yield at 2.87%, is reasonable as is its SEC yield of 1.98%. But as a genuine index type(i.e. generic) fund, it holds everything. That means it has enough longer term exposure to wind up with a lot more risk (Beta: 1.37) than I’m comfortable with at this point in the market cycle.

I’m going to focus instead on alternatives.

I liked this ETF on June 10 but I’m backing away from it now. It presently has a Bearish Power Rank. Because the duration is low (2.05 years versus an already-low 2.50 on June 10), the portfolio has had to roll over enough to make the published 2.73% yield completely unsustainable. Extrapolating the latest monthly distribution over the next 12 months, we’re looking at about 1.76%. The SEC yield of 1.1% suggests, though, that more rolloff of better-yielding paper is forthcoming. I appreciate the incredibly low 0.19 beta, and the most conservative accounts could hold based on that. Most others, though could, I think, do better elsewhere for now. 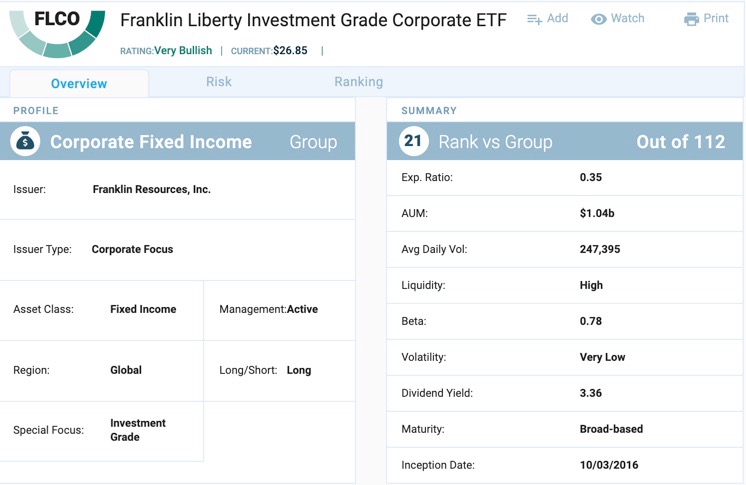 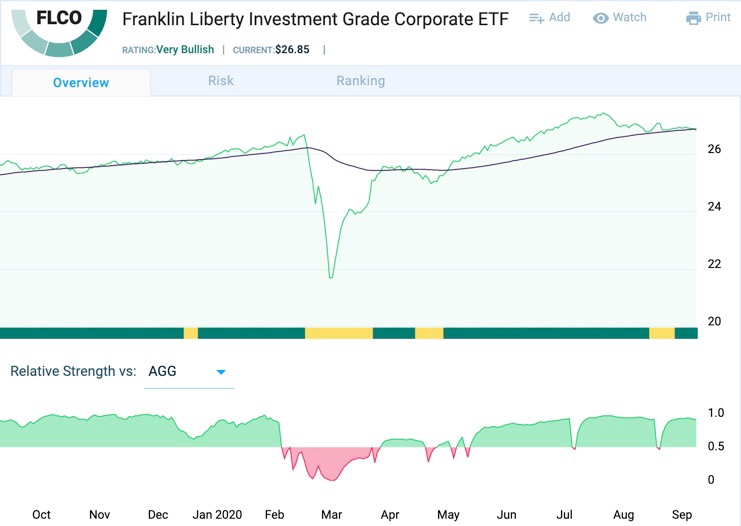 FLCO, which I also liked on June 10, has a published is 3.35%, above that of LQD. In both cases, expected, portfolio turnover into necessarily-lower-yielding paper is going to force the realized yield down, to 1.63% for FLCI based on the current SEC yield versus 1.98% for LQD. But potential price risk is much lower here: LQD’s duration is 9.63 years while FLCO’s is 8.63 years; that gap may seem reasonable in light of LQD’s yield advantage. But FLCO is an an actively-managed ETF. In equities, many are uncomfortable with this given frequent complaints among academics, gurus and commentators about active portfolio managers being unable to beat the market consistently. Without reiterating the entire active-versus-passive debate, I would say that when the economy is challenged and the interest-rate environment is such as to put fixed-income prices near their mathematical ceiling, I prefer the ability of human portfolio managers to over-ride naive-prospectus-mandated own-everything approaches and adjust maturities as they see fit. The humans-are-most-likely-wrong presumption was what it was in the equity market over the past generation, but in fixed income at this point in time, I’d rather bet on humans and common sense. (And by the way, modeling is not anathema at FLCO; it’s a tool, not the end all and be all). If rates move upward sooner than expected, FLCO would be better able to react defensively than could the  own-everything LQD fund, 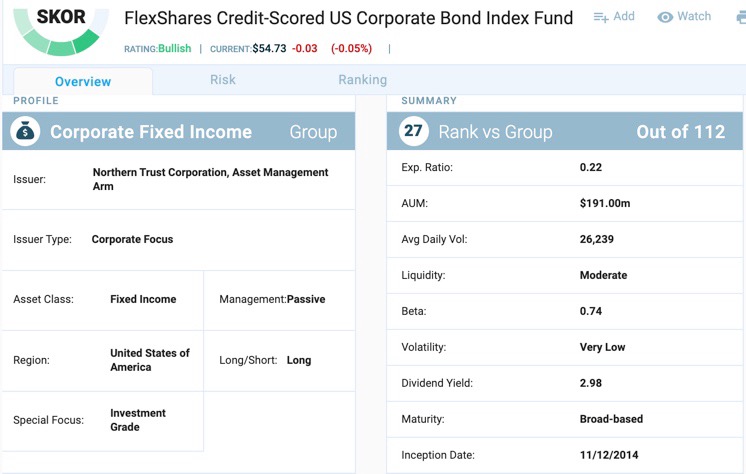 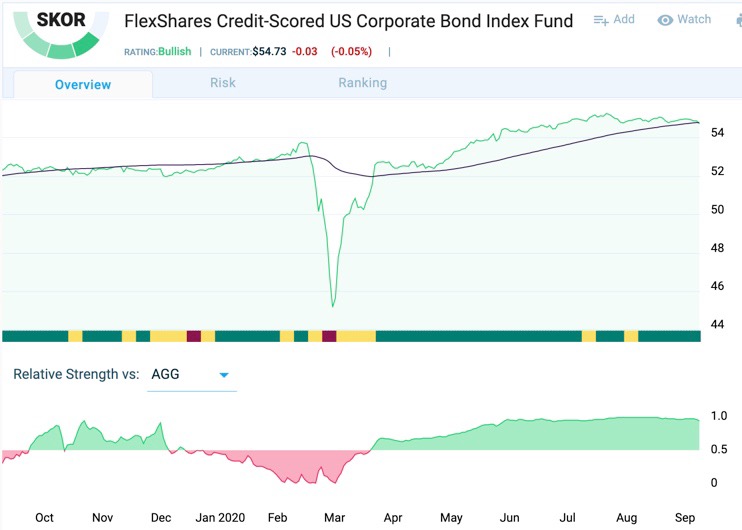 Describing SKOR, which I also discussed on June 10, as a passive ETF, is a but of a misnomer. It’s really a model-based approach that differs from an active ETF only in that portfolio selections are made by an algorithm rather than by humans. I like that since the algorithm uses fundamental fixed-income analysis to aim at a better yield-credit risk tradeoff than would be achieved through a generic buy-everything approach to investment grade fixed income. SKOR’s published yield is nominally above that of LQD but its shorter term portfolio (duration of 4.59 years versus 9.63 for LQD) means more of its portfolio has had to be rolled over into new purchases at lower rates. So SKOR’s SEC yield now stands at 1.06% versus 1.98% for LQD. The question is whether the lower maturity-credit risk (reflected in a beta for SKOR of 0.73 versus 1.37 for LQD) is worth the lower yield. Given a probable same-or-worse inflation/interest-rate outlook from here, I could see sticking with SKOR as a lower risk alternative to LQD (beta is 0.73 for SKOR versus 1.37 for LQD). 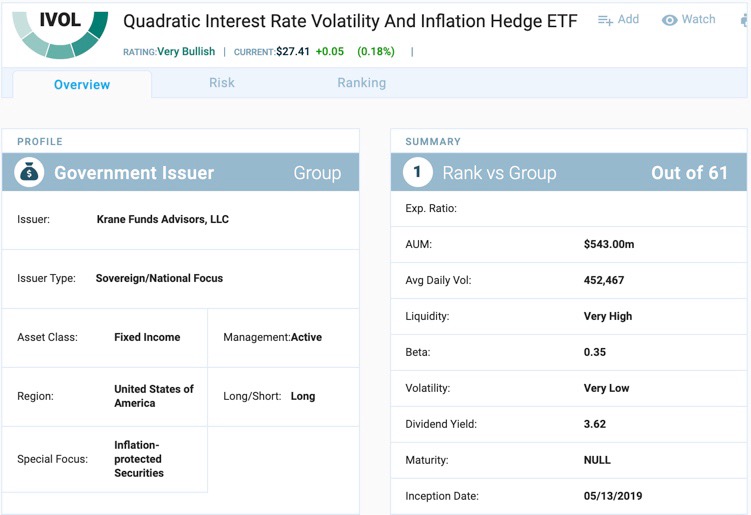 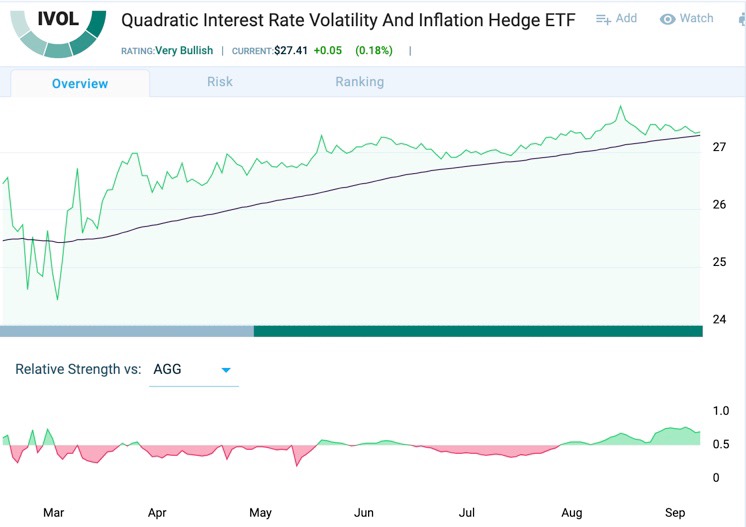 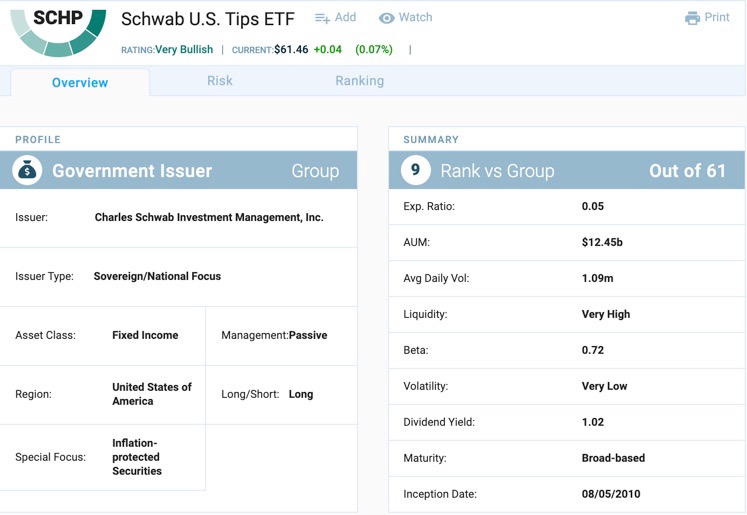 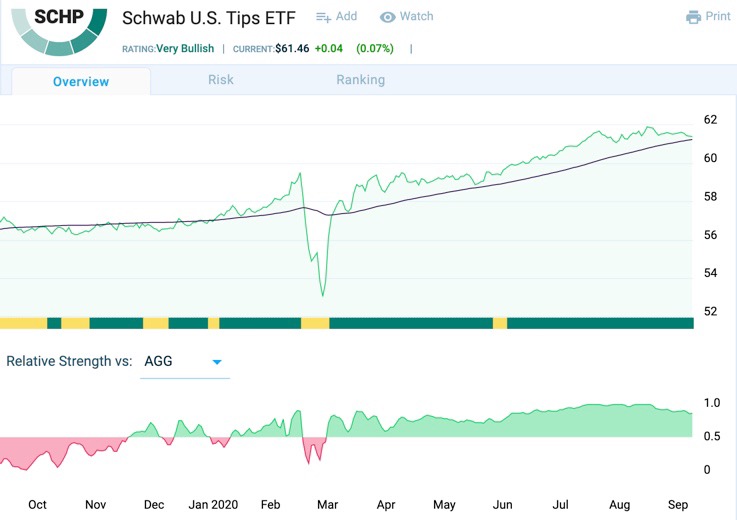 IVOL’s name is a mouthful isn’t it. So, too, is the ETF itself especially considering that I’m presenting it together with SCHP. As IVOL’s name suggests, it’s a bit exotic and I can see where that would be a turnoff for many risk averse fixed income investors. But getting a return much above zero is so hard today, this is at least worth a look, especially for those who would not like to expose themselves to high-yield (junk) bonds with the economy as precarious as it is.

At its core, IVOL is a TIPS portfolio: Specifically, IVOL is invested in the Schwab US TIPS Government Issuer ETF (SCHP)  and based on the latest distribution, the implied yield is 2%, but the fund reports a “distribution yield” of 0.95% as of 8/31/20. The SEC reported yield of 5.39% looks aberrant and I would not factor it into an investment decision here. I’ll go with 1% for decision-making purposes which in this market, seems reasonable for an inflation-protected ETF.

So why not just buy SCHP, which comprises 87.5% of IVOL’s portfolio. You can certainly do that. SCHP has a Very Bullish Power Rank, and so, too, does IVOL. But IVOL adds a creative kicker. About 7% of IVOL’s portfolio is in cash, and the rest are held in some interesting derivatives. These comprise 5.5% of the portfolio, but probably 100% of the investment case for IVOL.

These are derivatives, specifically over-the-counter options privately agreed to by two parties (consistent with a widely-used master agreement relating to such derivatives) based on swap agreements, in which a borrower offloads a floating-rate it owes to a bank for a guaranteed fixed-rate from the bank. Variations (spreads) between the fixed and variable rate schedules embody expectations regarding future interest-rate movements.

The SWAPS currently owned by IVOL are 2-10s; the spread between 10-year swaps and 2-year swaps. IVOL owns eight such contracts with option expirations ranging from 5/13/21 to 3/16/22. As a buyer of these options, IVOL stands to benefit from increased interest rate volatility or inflation expectations, which would put upward pressure on the 2-10 swaps.

This makes IVOL a double-barrel play on the interest-rate environment becomes harsher than the FED is leading us to believe it now is. Whether one prefers SCHP or IVOL depends on one’s tolerance for complexity, but either or both are interesting hedges against trouble ahead in the fixed income market.

Marc Gerstein, Director of Research at Chaikin Analytics, is an oddball sort of quant. He has long specialized in rules/factor-based equity investing strategies and has been addicted to stock screening since the days when the program was loaded into a pc on a 5 1/4” floppy disc that went into Drive A and the disc holding data went into Drive B. But he hates fancy math has no use for by-now stale “factor” worship. He favors theoretically sound quant approaches, such as the Chaikin Power Gauge model, that generate active, actionable ideas for the real world. In his spare time, he tries to dull the pain of following the NY Jets and Knicks with reality TV and literature. (We have quantamental, so why not literatrash?)

Friend me on Goodreads

PortfolioWise helps advisors enhance client engagement and outcomes through its unique, forward-looking quant-based ETF performance ratings, portfolio analytics, and client-friendly visual communications. PortfolioWise is powered by Chaikin Analytics’ market-proven methodology that has been rating US stocks for more than 10 years.